Main Help Tools Proportions Chi Square test One way Anova Kruskal-Wallis Test Variation Levene test Multiple Correlation Multiple linear Regression Generate Distribution Calculations Filter Sort data in subgroups Box-Cox transformation Gauge R&R Distribution fitting Graphs Full version of DevelveFor commercial use 75 EURO
The Kruskal-Wallis calculates if the Median of two or more data sets at least one data-set is significant different. The calculation calculates the test only from the checked data sets in the Kruskal-Wallis dialogue. This is the non parametric counterpart of the One way Anova test is for not normally distributed data but before using this test try to find out why the data is not normally distributed.

For a good result the data must

Data is randomly and independent. The data is continuous. The shape of the distribution of all data-sets are the same.

All selected data-sets are sorted and ranked in order. The sum of the ranks of each data-set is calculated (

Ties are data point with the same value.

Sample size calculation is the same as with the One way Anova but with 15% more samples. The result is the minimum sample size for all the data sets.

= Mean of ranks of group j

= Mean of ranks all ranks of all groups

= Amount of samples of group j

= amount of ties of a rank

= degrees of freedom (amount of groups)

From the selected data-sets there is at least one data-set that is significant different median compared to the other data sets. 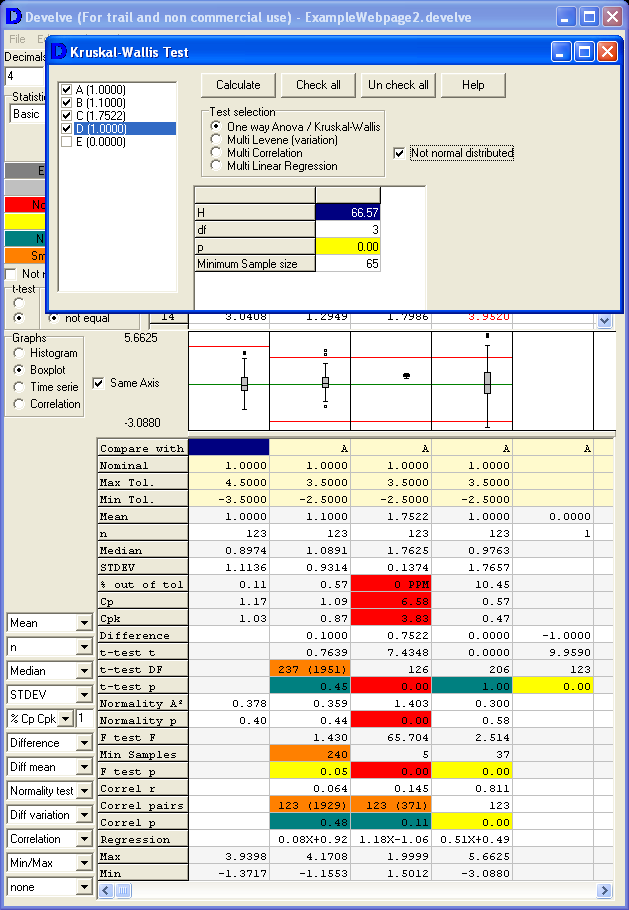